Timeline of Materials at Georgia Tech

The History of Materials at Georgia Tech

The history of the School of Materials Science and Engineering at Georgia Tech can be told, in part, through the evolution of its name. From its first days as the School of Textile Engineering to today’s School of Materials Science and Engineering, the redefining of materials education at Tech has been a reflection of the advances in the field of materials from textiles and fibers to the study of polymers, advanced metal alloys and carbon nanotubes, and the interdisciplinary nature of materials.

In 1897, the School of Textile Engineering was established by the State of Georgia.  A subsequent gift from Pittsburgh manufacturer, A. French, established the School as the A. French School of Textiles. The new textile program attracted attention not only from across the South but in every area of the country, and as far away as Europe and Australia.  The school had an advantage over other textile schools in that the textile engineering course included shop work, mechanical drawing and some mechanical and electrical engineering.  It was the third school established at Georgia Tech and it reflected the state’s then current demand for education in cotton-based manufacturing technology.

From the earliest part of the 20th century, many graduates of the School went on to create and run successful textile businesses and to take on leadership positions in the state. Over time, as synthetic materials became available for use as fibers and textile products, the School quickly adapted to these opportunities for technological innovation and, in 1989, the name was changed to the School of Textile and Fiber Engineering in order to reflect the growing opportunities for use of fibrous materials in applications other than textiles.   While retaining its historical connections with the textile industry and its expertise in textile and fiber technology, the School, under the leadership of School Chair Dr. Fred Cook, underwent further transition to embrace a broader set of opportunities in the polymer arena.  In keeping with Georgia Tech’s status as a major research institution and reflecting the faculty interests, the focus shifted to a greater emphasis on the study of polymers.  Under the subsequent leadership of Dr. Anselm Griffin, a polymer scientist, the School intensified its efforts in the field of polymers.  By focusing on polymers, the School’s remit broadened to include coatings, plastics, composites, adhesives, and elastomers which, when coupled with its history in fibers and textiles, positioned the School to be a significant contributor to Georgia Tech’s efforts in nanoscience and nanotechnology. 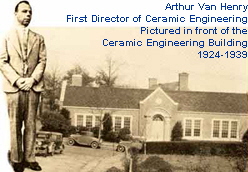 Meanwhile, in 1924, during the advent of the kaolin industry, the School of Ceramic Engineering was formed, a reflection of Georgia’s growth in the ceramic and mineral industries and Georgia Tech’s prominence in engineering education.  The advent of the space age in the 1960s greatly increased the need for ceramic engineers to create spacecraft materials capable of withstanding the extreme environments of space and by the 1970s; the School was at the forefront of materials development throughout the world, engineering components for nuclear reactors, spacecraft, and electronic materials.

In the mid-70s, Dr. Helen Grenga joined the faculty of the Metallurgy Program, then under the auspices of the School of Chemical Engineering, and became the first woman faculty member in the College of Engineering.  Dr. Grenga's appointment began a process at Georgia Tech that has led to more women faculty members and students than at any other major college of engineering in the United States.

With a number of faculty holding appointments across the two schools, a decision was made to combine the Schools of Polymer, Textile and Fiber Engineering and Materials Science and Engineering and on July 1, 2010, the two schools officially merged to become the new School of Materials Science and Engineering.  The MSE name was maintained in order to best reflect the all-encompassing coverage of materials within the School.

From its earliest days as the School of Textile Engineering, MSE has had a huge impact on the economic development of Georgia as a result of its work with the textile mills and the education of mill leaders.  Today, faculty are advancing fuel cell technology, nanotechnology, bio-inspired manufacturing, photonics, light emitting diodes, electronic packaging, hypersonic materials, bionics, nanocomposites, light weight nano-actuators and nano-sensors.  Numerous companies have evolved from technology developed within the School, thus continuing to positively impact Georgia’s economy.

The School of Materials Science and Engineering has played, and will continue to play, a key role in the advancement of our technological society and is poised to make even more significant contributions in the years to come.